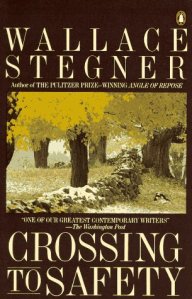 I remember the first time we came here, and what we were then, and that brings to mind my age, four years past sixty. Though I have been busy, perhaps overbusy, all my life, it seems to me now that I have accomplished little that matters, that the books have never come up to what was in my head, and that the rewards–the comfortable income, the public notice, the literary prizes, and the honorary degrees–have been tinsel, not what a grown man should be content with.

Whatever happened to the passion we all had to improve ourselves, live up to our potential, leave a mark on the world? Our hottest arguments were always about how we could contribute. We did not care about the rewards. We were young and earnest. We never kidded ourselves that we had the political gifts to reorder society or insure social justice. Beyond a basic minimum, money was not a goal we respected. Some of us suspected that money wasn’t even very good for people–hence Charity’s leaning toward austerity and the simple life. But we all hoped, in whatever our capacities permitted, to define and illustrate the worthy life…

Leave a mark on the world. Instead, the world has left its mark on us. We got older. Life chastened us so that now we lie waiting to die, or walk on canes, or sit on porches where once the young juices flowed strongly, and feel old and inept and confused. In certain moods I might bleat that we were all trapped, though of course we are no more trapped than most people. And all of us, I suppose, could at least be grateful that our lives haven’t turned out harmful and destructive. We might even look enviable to the less lucky…

I didn’t know myself well, and still don’t. But I did know, and know now, the few people I loved and trusted. My feeling for them is one part of me I have never quarreled with, even though my relations with them have more than once been abrasive.

In high school, in Albaquerque, New Mexico, a bunch of us spent a whole year reading Cicero–De Senuctate, on old age; De Amicitia, on friendship. De Senuctate, with all its resigned wisdom, I will probably never be capable of living up to or imitating. But De Amicitia I could make a stab at, and could have any time in the last thirty-four years.

Prototype: What Happens When You Discover That You’re More Like Jesus Than You Think?
by Jonathan Martin

It was an oversight that left this off of my listing for the last Roundup, because clearly I was already reading it. This morning I finished this book with my appetite whetted rather than satisfied. I would love for Martin to write both a memoir and a novel, and I would read both of those and perhaps be closer to satisfied, because he is a fantastic storyteller.

Jonathan, if you somehow read this, (1) no, you are not too young to write a memoir (as Lauren Winner proves) and (2) the novel can be about anything and your stamp will be on it (in a great way).

Everyone else should listen to the Renovatus podcast. (I recommend starting with “Suffering” from 7/1/12.)

Several years ago I decided that the monks had a good idea (#facetiousalert) when they made devotional reading part of their daily spiritual rhythms, and I’ve added such readings to my daily devotionals ever since. This is the current book in that position.

According to Douglas Steere’s Foreword (not to be confused with Thich Nhat Hanh’s Introduction), this was Thomas Merton’s final book before his death. I honestly don’t know if that means it was published or completed or mostly completed and then pulled together posthumously, but it is at least a symbolic culmination of Merton’s life and teaching. It is deep and intense and knowledgeable in a way that makes me think, “I could return to this book once every eight months or so, for the next several decades, and it would be a new book every time.” Which is why I shared a lengthy quote from it two days ago.

Crossing to Safety
by Wallace Stegner

I discovered Wallace Stegner at a church rummage sale over ten years ago, with this very copy of this very book. He’s one of those ‘writer’s writer’ types, supposedly, someone whom writers know and read, but who never enjoyed a ton of wide knowledge and acclaim (crazy to say, since he won the Pulitzer and the National Book Award for two separate works). I apparently have something about books written at the end of people’s lives, because this was Stegner’s final novel, and all his wisdom and skill are deposited in it.

It’s also one of those books that I’ve been afraid to return to, because I love it so much that a re-read twelve or thirteen years later can only diminish my memory of it. Why do I love it? Because it’s a quiet novel which has a plot but which is about its characters. It’s also about friendship over time, and more and more I believe that maybe about the most important thing we have on earth.