I knew nothing of Thomas Merton’s relationship with his father Owen beyond what Thomas himself wrote in The Seven Storey Mountain until I recently read “Thomas Merton and the Search for Owen Merton” by Robert E. Daggy. Daggy, the longtime director of the Thomas Merton Center, had at least considered writing a full-length biography of Owen Merton before Daggy himself died in 1997.

After 1925, Owen withdrew into self-imposed solitude. He wanted, again, to devote himself to his painting. He wrote to Evelyn [Scott], “I think I had better stay quietly by myself for a long time.” It is at this point that we can see parallels between Owen’s life and Tom’s life as he related it in his writings. Father and son had both engaged in “illicit” (did they believe “sordid”?) sexual escapades. Both came to see such involvement as detrimental to themselves, their spirits, and their vocations. Both came to see sexual abstinence as necessary to their lives. Both withdrew to the fringes of society–Owen to the French countryside, Tom to the knobs of Kentucky. Owen called the house which he started to build at St. Antonin his “hermitage.” Tom was to call at least two places at Gethsemani his “hermitage.”

…Anthony T. Padowan put it this way: “Merton’s entire adult life is a search for artistic and spiritual excellence, one sustaining the other, both converging into a striking unity, each initiated by his father.”

By Daggy’s read, Thomas carried a longing to understand and be loved by his father (a man who seemed to be far more devoted to his art than to Thomas or any other person or personal commitment in his life) to his grave, going so far as to try to track down and collect Owen’s paintings and letters in the 1960s.

Thomas Merton is teaching me yet again. Against the first myth stands the reality of his own pain in wanting to know and be known by his father. His conversion and transformation did not remove his father’s impact–good and ill–on him. Against the second myth stands the fact that this pain was not something he needed to “beat” or have erased from him in order to become the saint he was. In fact, that kind of lifelong longing was most likely his teacher in learning to long for God. 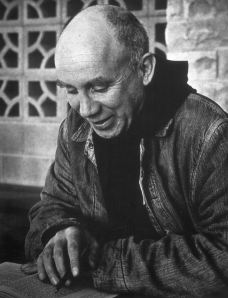